William Oliver Spencer, a successful farmer of Williamson county, is a son of William and Rachel (Brooks) Spencer. The grandfather of our subject, Moses Spencer, was born and raised in New York, and after marriage located on a farm near Albany. His land was taken from him, however, by Van Rensselaer, who obtained a grant from the British Government, and he lost his entire possessions. 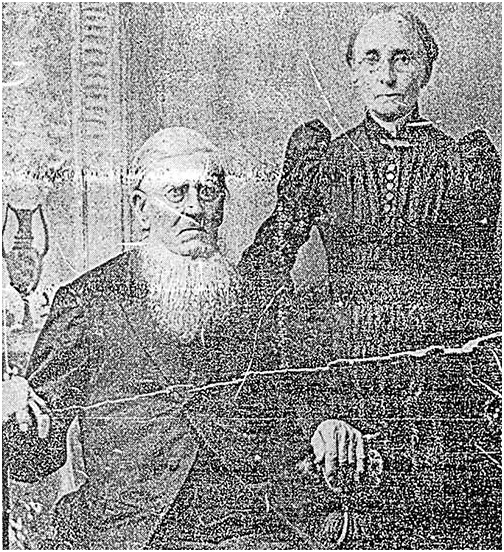 With a family consisting of a wife and one child, the father of our subject, he then emigrated to Pendleton District, South Carolina, where he remained until after the Revolutionary war, in which he served as a private soldier during the entire struggle. Late in the last century the family located in Barren county, Kentucky, where William Spencer grew to Manhood, having been born in 1771. He was married there to Lorania Snow, and they had three children, all of whom are now deceased. The wife. also died. The father then moved to Illinois, locating near the Indiana line, where he married the mother of our subject, a lady of Irish birth. The family continued to reside in Illinois until 1854, when the mother died, and the children having married and left home, the father went to live with a daughter in Iowa. He died there in 1857. Mr. and Mrs. Spencer were the parents of seven children: Betsy, deceased; William O., our subject; Jane A., John M.,• James B. and Rachel, deceased; and Thomas C., a resident of Livingston county, Illinois. Mr. Spencer was a farmer by occupation, a Whig in politics, a Baptist in religious faith,. and was a prominent man in his community. He served many years as a Justice of the Peace. During the war of 1812 he lived on the Wabash river, and by personal request of General Harrison, then Governor of Indiana,- remained at home and took charge of the mills of that section.

William Oliver Spencer, the subject of this sketch, was born in the then Territory of Illinois, in what is now Lawrence county, September 2, 1810. In 1824 he moved with his parents to Fulton county, west of Illinois river, where he grew to manhood, and was there married.

From 1838 to 1851 the family resided in Washington county, near Fayette, Arkansas. In 1847 they came on a prospecting tour to Texas, remaining in Bastrop about one year, and in 1849 returned to Arkansas. In 1851 they sold their possessions in that State, and again came to Texas, remaining in Bastrop until after the wife’s death. Mr. Spencer then purchased 553 acres of land at his present location, three miles above the present site of Liberty Hill, and was one of the earliest settlers in this part of the county. For several years after locating here, Liberty Hill was without a post office. One day General Rusk, a prominent figure in early Texas history, camped a short distance from Spencer’s home, with a body of rangers. He was invited to supper at the latter’s, house, and after the meal Mr. Spencer stated his desire to have a post office located in this part of the county. As General Rusk was a member of Congress and Chairman of the Post Office Committee, he sat down and began writing a recommendation that an office be. located here, and that our subject should be the Postmaster.

Mr. Spencer was asked for a suitable name for the office, and, thinking of the free and easy character of the people, answered, “Call it Liberty Hill, General.” Mr. Spencer held the office several years, and then resigned the position in favor of the first merchant that located in this section.

Mr. Spencer was first married July 19, 1829, to Amy Wilcoxon. They had twelve children, only four of whom grew to years of maturity, viz.: Eliza Ann, widow of J. T. Miller, and a resident of Austin; Emily, deceased; J. M., of Belton, Texas; and Ellen, wife of J. W. Owen, also of that county. The wife and mother died in Bastrop, January 12, 1853. In 1854 our subject returned on a visit to Fulton county, Illinois, and was there married to Mrs. Margaret Spencer, who was born in Fayette county, Pennsylvania, May 4, 1826, a daughter of William B. and Mary (Reagan) Smilie. On the maternal side, the family located in the latter county from Wales before the Revolutionary war. The Smilie family are of Irish descent, the great-grandfather of Mrs. Spencer, John Sniffle, having emigrated to America from that country. He was one of the first settlers of Fayette county, Pennsylvania, and while there was prominent in public: affairs, having represented Pennsylvania in the United States Senate. The grandfather, Robert P. Smilie, passed his entire life in that county. Mr. and Mrs. William B. Smilie had seven children: Weldon R., of Woodford ‘county, Illinois; Margaret C., wife of our subject; Robert P., of Liverpool, Fulton county, Illinois; Harriet, wife of C. A. Babcock; Norvol, deceased; and Norman and David H., of Stella, Nebraska. Margaret Smilie was first married in Fulton county, Illinois, where her father had moved his family in 1841, in 1844, to James B. Spencer, a younger brother of her present husband. They had four children: Theodore, of Lovelock,. Butte county; California; Ann E., wife of J. M. Spencer, of Belton, Texas; Harriet E., widow of Jeff J. Miller, who lives with her parents; and William A., of Liberty Hill. Mr. and Mrs. .William O. Spencer have also had four children: Perry, deceased; Oliver, of Liberty Hill; Lizzie, wife of M. C. Hurley, of Ft. Worth, Texas; and ‘Tau, now .Mrs. J. M. Grant, also of that city.

Enter your email below to receive updates and information on upcoming events.

Search records by any keyword such as First Name, Last Name, DOB, DOD, or year of birth or death

2020 Annual Meeting on December 12 to be POSTPONED

The Liberty Hill Cemetery 2020 Annual Meeting scheduled to be held on December 12 at 10 am at the cemetery pavilion located at 16101 West Hwy 29 is being postponed. Due to the change in Williamson END_OF_DOCUMENT_TOKEN_TO_BE_REPLACED