Liberty Hill Cemetery is located about two miles northwest of the present town of Liberty Hill, Williamson County, south of S H 29.This beautiful site, about sixteen acres in extent, is carefully landscaped, with its beauty enhanced by the many large live oak trees which grow there. It is a source of pride to those whose loved ones rest there, a place of quiet repose to refresh the eye of the casual passer-by.

It has not always been this way, so let us go back to its beginning and review its history. 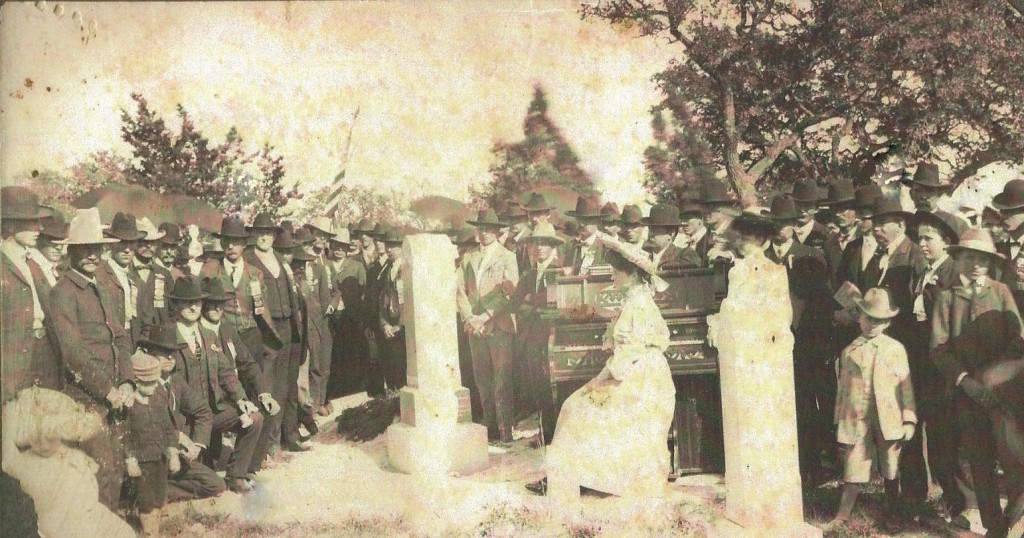 In 1852, when the early settlers of “Old Liberty Hill” were beginning to establish their homes along the South San Gabriel River, members of another family were leaving their home in Greenville District, South Carolina, to begin the long trip to Texas. John T. Bryson, who was born in 1813 in Henderson County, North Carolina, with his wife Amelia Edwards Bryson and six of their eight children (two were born in Texas) came to Gay Hill in Washington County to reside for a few months before moving on to Williamson County, where they built a house, still standing, on what came to be known as “Bryson Hill” near Old. Liberty Hill. The house, built in 1853 of Bastrop County cedar, freighted in by ox wagon, was in the style of the day, with long front porch, dog run, outside kitchen and smoke house, all enclosed by a rock fence with stile and stone mounting block for the horseback riders.

As more settlers moved in, the need for a community cemetery became apparent, and John T. Bryson met that need. As stated in the deed, “due to my desire to secure for my own family and for the people generally in this community, a permanent and properly improved and protected Burial Ground”, on 20 March 1875, he signed a quit-claim deed to three and one half acres of his land, which deed was recorded in Williamson County on 11 August, 1875.

The land was deeded in trust to the Board of Trustees, and their successors, for “Liberty Hill Cemetery”. This first board was comprised of T.N. Bryson, T.S. Snyder, J.B. Roddy, W.H. Poole and C.C. Chance, all near-by landholders. The Bryson family, assisted by their neighbors, built a stout rock fence around this land.

Many of these early graves are enclosed by vaults or high walls of limestone. On some, the ravages of time have left no trace of names or ‘dates. In 1899, after the demise of their parents, two sons, T.N. Bryson and J.H. Bryson, as executors of the estate, sold an additional two and one fourth acres adjoining the original plot, for cemetery use.. This land was deeded to Collin Munro, Warren Bryson, J.T. Smith, P.S. Ford and H.C. Fowler, Trustees.

The next land was acquired in 1949, being one and seven tenths acres donated by Dr. H.L. Fowler and his wife of Denver, Colorado, as a memorial to his parents, H.C. and Kate Fowler, both of whom are buried in the cemetery. Trustees at that time were Warren Bryson, L.T. McFarland, D.W. White, J.L. Myers and T.M. Casbeer.

Meantime, in 1932, the Royal Arch Masons of Liberty Hill had purchased three acres of land from Mr. and Mrs. L.T. McFarland to be used as a cemetery,(land adjacent to the Liberty Hill Cemetery).A number of improvements were made at this time, the most outstanding being the construction of a low stone wall on the side fronting on the highway, with a brick entrance arch into the cemetery. Later this land was deeded to Liberty Hill Lodge No. 432, A.F. and A.M. In 1959, this Masonic Cemetery was deeded to the Liberty Hill Cemetery Association and the two became one.

Also in 1959, a five acre tract of land was acquired by purchase from Dr. H.L. Fowler and his wife, Mrs. Vivian Fowler.

As is too often the case, as the cemetery grew larger and the old families were scattered, maintenance of the cemetery grounds became an increasingly difficult task. In 1913 a group of ladies of the community determined to overcome this problem by organization of a Cemetery Association. Ably assisted by the men of the town, the group worked very hard at raising funds, and also sponsored a yearly “clean-up” day. By their untiring efforts, at the end of the first year they had the sum of fifteen hundred dollars, two hundred fifty dollars of which came from the estate of Mr. and Mrs. Walter Gardner.

Their first purchase was a horse-drawn hearse. A team of matched black horses was furnished by Mr. Walter Witcher and Mr. Emmet Farquhar was the usual driver.

Despite their enthusiastic beginning, in time the organization gradually fell apart, but the problem of maintenance remained.

In 1950, another group met and organized the Liberty Hill Cemetery Association. Dr. J. Gordon Bryson of Bastrop, grandson of John T. became the first president; Mrs. Letitia Russell, Secretary; Mr. C.F. Hickman, Treasurer. In June, 1952, after much effort and planning, the first Homecoming was held. It met with much enthusiasm from all who attended. Each year since that event, the first Sunday in June has been designated as Homecoming Day. Religious services in the morning, dinner on the grounds and memorial services in the afternoon attract a crowd usually numbering about one thousand people.

In July, 1953,the organization was incorporated. Much of its success may be attributed to Mr. C.L. Chance, the first vice-president, who, since its inception, has devoted his legal talents to the perfecting of the Association, all without remuneration.

A memorial fund was started in 1955. In his will, Mr. T.E. McDaniel bequeathed four hundred dollars as a permanent in¬vestment fund, with the interest from it to be used for cemetery up-keep.

Mr.Arthur Gray was another benefactor. Since 1957, a monthly income derived from his property has come to the Association. These funds have greatly assisted in carrying on the program to improve the property. 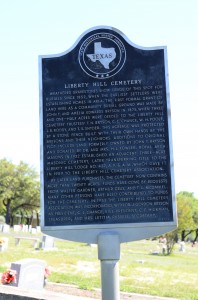 Among these improvements are a deep well, which furnishes an abundance of water, new fencing, additional roads, with curbing, flower beds and shrubbery; several buildings, among them a tabernacle where the services are held at each Homecoming.

So, through all these ninety five years, countless hours of unselfish labor by hundreds of devoted persons and many, many dollars contributed as donations or as memorials to friends and relatives have combined to carry out that desire expressed by John T. Bryson.

To provide for the community of Liberty Hill “a permanent and properly improved and protected Burial Ground”.

Enter your email below to receive updates and information on upcoming events.

Search records by any keyword such as First Name, Last Name, DOB, DOD, or year of birth or death

2020 Annual Meeting on December 12 to be POSTPONED

The Liberty Hill Cemetery 2020 Annual Meeting scheduled to be held on December 12 at 10 am at the cemetery pavilion located at 16101 West Hwy 29 is being postponed. Due to the change in Williamson END_OF_DOCUMENT_TOKEN_TO_BE_REPLACED